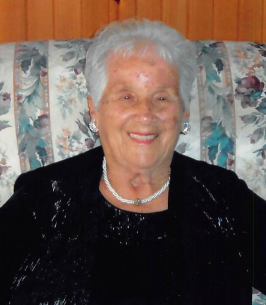 The family announces with sorrow the peaceful passing of Evelyn Burns (nee Anderson) at Temiskaming Hospital, on Sunday October 2, 2022, with her loving family at her side. Evelyn was born and raised in Latchford, and at the time of her death she was the oldest resident of Latchford.

She was predeceased by her husband Arthur Burns in 1991, her sons Gary, 1992, Arthur, 2022, and Dan 2022; her mother, Mary (nee Amell) and father Thomas Anderson; her brothers Lawrence, Thomas, James, Arthur, Wilbert, Norman, and Elmer Anderson, sisters Clara Bates, Mary Cochrane, and Violet Liscumb, Evelyn was the last of eleven children.

She is survived by her son Ross Burns and her daughter Laurie Taylor, who was her loving caregiver for many years, and her niece Janice Walsh who was like a daughter. Also survived by her grandchildren Brent Burns, Tracy (Ted) McGregor, Trevor Taylor, Robin (Phil) Koistinen, Dan (Bett) Burns, Dana Laronde, Arthur Jr.(Tammy) Burns, many great and great-great grandchildren. Also surviving is daughter-in-law Melody, and many nieces and nephews.

Although, Ev made many friends and aquaintances over the years, she will be very sadly missed by her best friend of over 60 years, Ruth Sommerville, and her son Dwight Wainman.
Evelyn owned and operated various businesses in Latchford, including the Northland Tavern, she loved listening to the live music entertainment on weekends. She was a lifelong learner, she took business training, and in 1967, she became a Registered Nurse Assistant at Miseracordia Hospital in Haileybury. She valued being a nurse and could often be found referencing her text book that was a constant companion at her side.

Evelyn also liked to share that her brothers James, Arthur, and Norman served in the Active Army in World War II. They were all fortunate to come to Latchford, when the war ended.

She enjoyed many years travelling and spent many winter holidays in Florida, Arizona, and California.

The family wishes to thank Dr. Wilson and other Doctors, who were involved in her care; the nursing and personal support staff; and a special thank you to Renee, who went above and beyond at Temiskaming Hospital.

In lieu of flowers, donations may be made to Temiskaming Hospital Foundation - Care Close to Home or a charity of your choice.