To share your memory on the wall of Garry Hermiston, sign in using one of the following options:

Print
Hermiston, Garry - With heavy hearts the family announces that Garry died peacefully at North Bay Regional Health Centre on Wednesday May 26, 2021 at the age of 78.

Garry is survived by his loving wife of 58 years, Bernice (nee Johnston)... Read More
Hermiston, Garry - With heavy hearts the family announces that Garry died peacefully at North Bay Regional Health Centre on Wednesday May 26, 2021 at the age of 78.

Garry was a heart transplant recipient patient and was gifted with 28 years of life for which he was forever grateful. Special thanks to Dr. Neil McKenzie at University Health Sciences Care in London, the doctors and staff at North Bay Regional Health Centre and to Dr. Corneil and his staff.

In kindness, donations may be made to the Heart and Stroke Foundation. A private funeral service will be held followed by interment at Mount Pleasant cemetery. Condolences may be left at www.buffamleveille.com.
Read Less

We encourage you to share your most beloved memories of Garry here, so that the family and other loved ones can always see it. You can upload cherished photographs, or share your favorite stories, and can even comment on those shared by others.

Posted Jun 02, 2021 at 02:48pm
Hello Bernice, I am a cousin of Garry's and I remember him as a young man. He was so kind and loving and we knew him as the baby of the family. His Mom and Dad were wonderful people and they made a lovely family. I attended church with them for quite a while when I lived up north. Marilyn and I sang in a quintet with Ruth Clark.

Posted May 31, 2021 at 01:52pm
Bernice, Donna and Terry so saddened to learn of Garry’s passing. Our thoughts and prayers are with you at this sorrowful time.

Posted May 29, 2021 at 07:32pm
Dear Bernice and family:
David and I were very sorry to hear about Gary's passing. What a loss you must feel. Be assured that a place was prepare for Gary in his Father's house. May God be your refuge and your strength, a presence in your mourning. Thinking of you.
Love
David and Alice Manary
Comment Share
Share via: 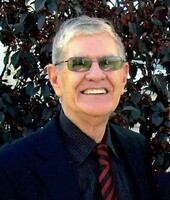