To share your memory on the wall of Jeffery Belanger, sign in using one of the following options:

We encourage you to share your most beloved memories of Jeffery here, so that the family and other loved ones can always see it. You can upload cherished photographs, or share your favorite stories, and can even comment on those shared by others.

Posted Mar 04, 2021 at 07:17pm
I had the honor of working with Jeff for The Town of Haileybury and later for The City of Temiskaming Shores.Jeff was one of the best if not the best icemaker.He had the art of making ice for the hockey arena,in my opinion he could have worked any NHL arena in North America.Jeff had a great sense of humor,was a great teacher,and work was fun.Jeff kept a book of funny things that happened on the job.He shared with me the story of the little boy that came a half hour early for public skating with a pack sack full of canned goods.Admission for public skating was a canned good for the food bank.Jeff says to the little boy you only have to bring one can..but sir,you don't understand and Jeff says understand what?..The little boy says I don"t like peas.Jumpin F..Jack
Comment Share
Share via:
CM

Posted Mar 01, 2021 at 06:42pm
Dear Aurele and family. I am saddened to read of Jeff's passing. May he be wrapped in his mom's arms once again. May God Bless, Molly
Comment Share
Share via:
JL

Our deepest condolences to Aurele and family. Dennis and Jo-Ann Lathem 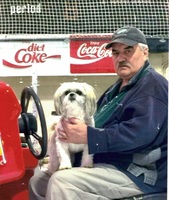