To share your memory on the wall of Joan Bolger, sign in using one of the following options:

Print
Bolger, Joan - It is with profound sadness that the family of Joan Mary (Cochrane) Bolger announce the passing of their loving and devoted mother and best friend on Thursday, May 27th, 2021 at the Temiskaming Hospital in New Liskeard.

Jo... Read More
Bolger, Joan - It is with profound sadness that the family of Joan Mary (Cochrane) Bolger announce the passing of their loving and devoted mother and best friend on Thursday, May 27th, 2021 at the Temiskaming Hospital in New Liskeard.

Joan was predeceased by her parents, William Cochrane and Pauline Sullivan, and her younger brother, John Cochrane. After fifty-two years of marriage, she endured the heartbreaking loss of her loving husband, Ron, in 2009. Joan is survived by her youngest brother, Rodger Cochrane, of New Liskeard.

She warmly welcomed and loved her selected daughters and their husbands, Anita & Matt Williams and Lynn & Steve Belanger into The Crew, and they will miss her dearly. In her life’s gathering of friendships, Joan formed forever bonds with Darlene & Jack Perrault, Aurel Belanger, Charmaine “Grace” Bragg, Larry & Parris Olsen and Marty Tresidder. Joan’s caring ways and her sense of humour are also sadly missed by the Bolger family in-laws, and nieces and nephews. Joan was the glue that bonded her immediate and extended family together. Her home was the one stop that family and friends insisted on visiting when travelling through the area. Her signature wave, an “I Love You” in sign language, has sent many on their way.

Born in Duparquet, Quebec on May 19th, 1935 Joan would survive childhood tuberculosis, tetanus, and scarlet fever. She graduated from North Cobalt Public School and Cobalt High School before earning her apprenticeship certificate from the North Bay Hairdressing School. Joan returned home to her parents in North Cobalt and set up Joan’s Beauty Shop in Cobalt. She would soon marry Ron, the handsome, brush-cut bus driver who drove her to work each day. Their love story and family homes were established in Haileybury, Atikokan, and North Cobalt as Joan operated her hairdressing and seamstress businesses from home while raising her busy family.

Joan embraced her destined life’s purpose to better the lives of others. She enjoyed an extensive community volunteer record that spanned sixty years of service. She lived to see her selfless acts of good deeds formally recognized locally, provincially, and nationally. Some of these honours that she humbly accepted included: a 2002 Governor General’s Caring Canadian Award, a 2017 Governor General’s Sovereign’s Medal for Volunteers, the CJTT 1999 Lifetime Achievement Award, and an Extendicare Volunteer Award for 17 volunteer years in the Craft/Activity room.

With the world-renowned skills of heart surgeon Dr. Tirone David at Toronto General Hospital in 2016, Joan vowed upon her recovery to “pay it forward”. As her chosen act of kindness, she appliqued and sewed lap blankets to surprise all sixty-six residents at Haileybury Extendicare. Joan’s passion for bringing joy to others also included writing inspirational messages on hundreds of rocks and painting them as ladybugs to be hidden in parks, stores, hospitals, etc.
Joan was a Lifetime Member of the North Sunshine Women’s Institute; held positions in the Br.54 Royal Canadian Legion Ladies Aux.; led 4-H Homemaking Clubs from 1956 to 1977 and founded/instructed a sewing and craft club for women in North Cobalt. Joan’s creative hands were rarely still, and her talents were many. She was a fantastic cook and many of her recipes were shared in your community cookbooks. Her famous sticky buns were so popular at the Haileybury Curling Club bonspiels that pre-orders were taken to avoid bidding wars. Her giant chocolate chip cookies were welcome rewards for many, whether they were devoured by school children competing in Br. 54 public speaking contests or members of the O.P.P. Dive Team.

Honouring Joan’s wishes, she has been cremated and laid to rest at the Haileybury Catholic Cemetery. Her family and friends will gather next spring when times permit the “Blockbuster” party which she suggested. Should you wish to honour Joan’s life, her chosen charities are The House of Kin (Sudbury) [1889 Regent Street, Sudbury, ON P3E 3Z7 - cheques only] and the Heart & Stroke Foundation. Condolences may be left at www.buffamleveille.com.
Read Less

We encourage you to share your most beloved memories of Joan here, so that the family and other loved ones can always see it. You can upload cherished photographs, or share your favorite stories, and can even comment on those shared by others.

Catherine OGrady and Theresa Deschamps sent flowers to the family of Joan Bolger.
Show you care by sending flowers

Posted Jun 03, 2021 at 04:13pm
Skip and I extend our very deepest sympathy to the entire family on the loss of such a great lady. May all your happy memories help you through this difficult time. Hugs to all.
Comment Share
Share via:
LP

Posted Jun 02, 2021 at 02:12pm
I am so sad to hear this...as I have many wonderfull memories of your Mom from over the years.....We still have and cherish the "sock monkeys" that she made for Tanya and Amy. I smile when I remember the numerous weddings that she sewed for and how she giggled with us as she fitted our dresses.... sometimes over and over again.
I can still see her standing in the kitchen door at the Legion with that huge amazing smile looking out over everyone to make sure that everyone was okay.
And most recently ....she called me at a time when we were all feeling uneasy, afraid and uncertain of what tomorrow would bring....she had an idea on how we could bring our community together...and thanks to your Mom, many...many of the residents accross our district (from Temagami to Kirkland Lake) proudly displayed our Canadian flag ...which said; "Standing Together, To Flatten The Curve".
Your Mom and Gramma....Mrs. Joan Bolger was a very special lady ...full of so much goodness. I will never forget her. Hugs to all.
Lois Horie Perry
Comment Share
Share via:
L

Posted May 31, 2021 at 06:20pm
What a lovely and fitting tribute to such a beautiful person. I will always remember Joan's laughter, and the warm and caring smile.
That constant smile brought so much joy to everyone around her. She will be dearly missed by family and friends. Rest in peace Joan and take your place among the angels.
Your cousin, Linda Cochrane
Comment Share
Share via: 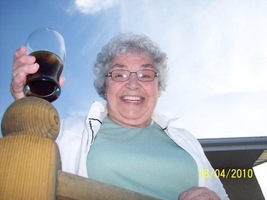 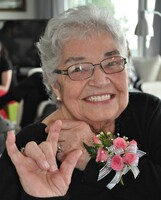 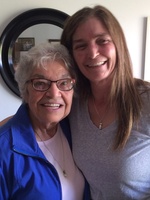 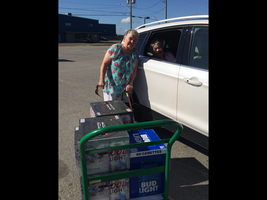