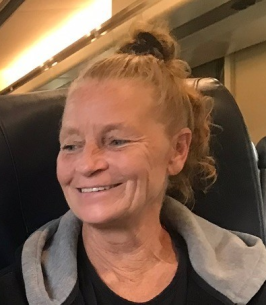 It is with much sadness and grief that the family of Loretta Baker announce her passing on Wednesday, December 29, 2021. She had just had a wonderful Christmas with her family. Loretta was predeceased by her parents Howard and Mavis Baker [nee Sedore]. Left to grieve and share memories are George Taylor [her spouse of 41 years]; her daughter Tatum Taylor; grandchildren: Isla and Luca; her sister Marlene Baker [Terry Elliott], brothers: Russel Baker [Cheryl Ballard] and Kenny Baker [Wanita Marriott]. Also left to mourn are her nieces and nephew: Sharron Elliott and Shannon Hack, Kristin Cooke and Tiffany Johnson, Angela Caron and Jason Baker. Loretta always presented you with that one of a kind vibrant smile. A long-time resident of the Tri-Town Area, her childhood was filled with riding ponies, horses and competition that resulted in many ribbons and trophies, as a result of growing up on a dairy farm with her sister and two brothers. She proved to be a dynamic broomball and baseball player. Birthday parties were a passion and she loved going full out for her daughter, granddaughters and nieces. Loretta was a very diligent working mom. Employed at Three H Manufacturing, Loretta later pursued a career in construction at Wabi Development, then at KBR and WB Melback becoming a Professional Certified Welder, Lead Hand and Supervisor. P.S. she could work as hard as any man. Loretta met George the love of her life at the Cobalt Miners Festival, that love lasted 41 years. Her life was jam-packed with travel. Taking her daughter and grandchildren to Marineland, Wonderland, Santa’s Village gave her great joy. Special thanks to the Doctors and Nursing Staff at Temiskaming Hospital and North Bay Regional Health Centre for the care given to Loretta. Cremation has taken place at Lakeview Crematorium in Haileybury. Arrangements entrusted to Buffam Leveille Funeral Home. Memorial donations in Loretta’s memory may be made to the Temiskaming Foundation. A celebration of life will take place in mid 2022. Condolences and contributions may be left at www.buffamleveille.com.