To share your memory on the wall of Robert Ruddy, sign in using one of the following options:

He often joked about how after he was born, his father took one look at him, and went off to war. When his father returned the family moved to Lorrain Valley and shared a home with his grandparents, Patrick and Martha Ruddy (Czapeskie). By age six the family moved to North Cobalt, a little village that he loved with his whole heart, right up until the day he died. Bob’s love of music began early in life. He grew up listening his father, Basil, playing the fiddle, and Bob taught himself to play guitar. “I used to practice in the outhouse. I’d play the guitar and sing at the top of my lungs, making all of the neighbourhood dogs bark!” He wrote his first song, “The Wild Goose Flies” at age 12 (in the outhouse) and continued writing songs (in more comfortable conditions) for the duration of his life. Bob was the lead singer with many bands over the years and performed
at weddings, community events and in bars/taverns/halls throughout North Eastern Ontario. He loved performing more than anything. In his later years he joined the Quality Time crew and performed with the talented group to raise money for Camp Quality, a special camp for children suffering from cancer - a place to get away from it all and have some fun. He also performed with the Temiskaming CT Scan Choir fundraiser, but often remarked that his voice was too loud to be in a choir. No guff, the man didn’t need a microphone. When karaoke became popular, Bob jumped on that bandwagon and started his own karaoke business. People loved singing when Bob was running Karaoke, but there were always many requests for him to sing his locally famous renditions of Jay and the American’s ‘Cara Mia’, and Roy Orbison’s ‘Pretty Woman’ and ‘Crying’ etc. The list is too long, you’d be reading this obituary all day.

By the way, Bob also got married and had kids. Bob married Carol Labine, a shy, young woman from North Cobalt. Carol was best friends with Bob’s sister Judy (Pasich) and she often told the story about how when she first lay eyes on Bob, she fell head over heals in love. Bob and Carol were married on September 21st 1964 and celebrated their 50th wedding anniversary on September 21st, 2014, surrounded by their family. Bob shared his love of music with his family and his children grew up
learning to play musical instruments and trying to sing as good as their dad - it never happened. Bob is loved and well known in the area for his powerful voice but Carol was always his biggest fan, often saying things like, “You sing that song better than Orbison ever did.” And she meant it.

Due to health issues, Bob spent the last four and half years of his life at Extendicare Tri-town. The amazing PSWs and nurses treated him like a beloved family member, making his final years in a LTC home much more positive. They played music together, sang together, joked and laughed together. Bob’s family members are forever indebted to these beautiful
hard working people. During his final days, his main caregivers, Lacey Breault and Chyanne Dubuc-Lavallee, were at his side. Chyanne and Lacey were chief mourners, side by side with his daughter when ‘Code Angel’ was called at Extendicare and Bob left the building. Bob’s family send their love and heartfelt thanks to these two beautiful ladies. Bob had many nurses and caregivers over the years but Ashley Bird was extraordinary in many ways. “That nurse is really smart.” He would say,
and it was always followed by “And beautiful inside and out.” Bob didn’t throw around the compliments like confetti. If he said it, he meant it.

Bob’s family would like to thank Ashley for always being there, not only for Bob but his family as well. Ashley was always someone that his family felt they could depend on and trust. Bob always had a lot of fun joking around and laughing with his nurse, Mimi Fortin. His memory faded over the years but his love of Mimi didn’t. “I just love that Cobalt nurse, she’s down to earth!” He would exclaim. Thank you for the good times, Mimi. Thank you for the much needed loveand laughs.

A special thank you to Nurse Judy (Judy Chambers) for always stepping up to the plate over the past four and a half years and advocating for Bob. If Bob needed something, Judy would get it done. Judy always had his back. Bob loved her for it and his family are eternally grateful.

Last but not least, the family sends ardent thanks to nurse Emilie Runnalls (Barbeau) who kept Bob comfortable during his final days. Thanks to Emilie’s advocacy, compassion and care, Bob passed away peacefully and without pain or fear.
Forgiveness is asked for not mentioning every single loving person who cared for Bob at Extendicare, the writer is terrified of missing someone and hopes that you are aware that you are in our thoughts and hearts. Please know that you are appreciated more than can be expressed in words.

In lieu of flowers, the family asks that you sign any petition you can find that gives PSW’s and health care workers better pay and better work place rights. That’s right, Bob was a union man and always looked out for the overworked and underpaid - no matter what job they were doing.

A celebration of life - “Bob Ruddy - Jam Session” will take place as soon as COVID is evicted from our lives - now that’sgoing to be a party youwon’t want to miss.

Memorial contributions to a charity of your choice will be gratefully acknowledged by the family. Condolences and contributions may be left at www.buffamleveille.com.
Read Less

We encourage you to share your most beloved memories of Robert here, so that the family and other loved ones can always see it. You can upload cherished photographs, or share your favorite stories, and can even comment on those shared by others.

Posted Apr 15, 2021 at 09:02am
My deepest sympathy to the Ruddy family. My thoughts and prayers go out to all of you, during this difficult time. Sincerely, Christine Rae
Comment Share
Share via:
SB

Posted Apr 13, 2021 at 04:45pm
My condolences to Bob’s family and close friends. There was never a song that Bob couldn’t perform and make it sound like the person that made it a hit. I will always remember Quailty Time year after year as our second family enjoyed the music, songs and the people who attended. Bob was a pro and a darn nice guy. RIP. Mike McArthur
Comment Share
Share via: 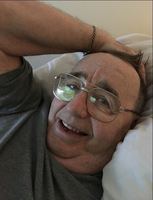